The Ontario Federation of Anglers and Hunters (OFAH), the largest charitable, non-profit conservation based organization in the province, strongly endorses the recent release of the Ontario Invasive Species Strategic Plan.

“One of the greatest threats to our natural resources and biodiversity continues to be aquatic and terrestrial invasive species,” said Sophie Monfette, OFAH Invading Species Awareness Program Coordinator. “We are delighted to see the release of the provincial strategy, and look forward to working in support of the action items contained in the report, including the need for greater public awareness, education and outreach. The strategy also emphasizes the need to prevent the introduction of new invasive species, which is a critical component to any successful plan to combat the spread of invasives.”

Across Canada, invasive species are responsible for billions of dollars of damage annually, and have the potential to cause irreparable harm to vital fish and wildlife habitat. The OFAH was one of the first organizations to recognize the threat posed by invasive species, which resulted in the creation of the Invading Species Awareness Program in the early 1990’s. For nearly twenty years, the OFAH has partnered with the Ontario Ministry of Natural Resources, which has provided matching funding for the program under a series of agreements since 2003.

“The OFAH is grateful to the Ontario government and in particular to the Ministry of Natural Resources for their ongoing support of our program, which has successfully engaged tens of thousands of Ontario residents in invasive species awareness and prevention,” said Monfette.

While much of the attention around invasive species is focused on aquatic invaders like zebra mussels, goby and more recently, the high profile Asian carp, it is equally important to recognize the large number of invasive plant species that have been introduced into the landscape. The threat posed by giant hogweed or garlic mustard is equally problematic, which can out compete domestic plants and in the case of hogweed, can be hazardous to human health.

“The Ontario Invasive Plant Council strongly supports the strategy’s inclusiveness, and the commitment to interdepartmental cooperation and collaboration with non-government partners like the OIPC and the OFAH. The challenge now will be to provide the necessary investment to implement the plan. Details of how the OIPC is working with other organizations to bring the plan to fruition can be seen on our website at www.ontarioinvasiveplants.ca,” said Owen Williams, Chair of the OIPC.

With over 100,000 members, subscribers and supporters, and 675 member clubs, the OFAH is the province’s largest nonprofit, fish and wildlife conservation organization, and the VOICE of anglers and hunters. Visit www.ofah.org and stay connected on Facebook and Twitter. 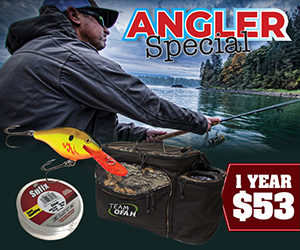