The recent native commercial fishing agreement signed by the Ministry of Natural Resources (MNR) and the Saugeen Ojibway First Nation (SON) includes provisions that concern the Ontario Federation of Anglers and Hunters (OFAH), local stakeholders such as the Sydenham Sportsmen’s Association (SSA), and recreational anglers in general.

“Once again, the province has failed to consult BEFORE signing an agreement on behalf of the people of Ontario, which will impact on the Owen Sound Salmon Spectacular and the larger recreational fishery on Lake Huron,” said OFAH Executive Director Angelo Lombardo. “The provision in the agreement that allows for the netting of fish in close proximity to the mouths of tributaries could negatively affect the spawning runs of several fish species, and the expansion of the commercial fishing area into both Colpoy’s and Owen Sound Bays could pose a serious threat to public safety and impact negatively on conservation of the resource. Regardless of the fact that negotiations on such agreements are confidential, given the upheaval that has occurred in the past, and the inclusion of new provisions in this agreement, at the very least the government should have met with all affected parties prior to signing the new deal.”

The wildly popular Salmon Spectacular attracts thousands of participants each year, generates considerable revenue that benefits local businesses, the municipality, the Fish and Wildlife Special Purpose Account (SPA) and serves as a major fundraising venture for local clubs such as the SSA. Funds from the Salmon Spectacular are directed towards the operation of a volunteer hatchery and stocking program and numerous other conservation projects. The local clubs spend thousands of person hours and considerable money running the hatcheries and stocking fish that form the basis for a thriving recreational fishery. Any agreement that may potentially undermine public safety, the conservation of the resource, or the efforts of these passionate volunteers, deserves careful scrutiny.

“The OFAH has a number of questions and concerns about specific details in the agreement related to implementation and enforcement,” said OFAH Provincial Manager of Fish and Wildlife Services Dr. Terry Quinney. “One of our concerns is related to the lack of consideration in the document for other fish species harvested as by-catch by the commercial fishery. We are encouraged that a quota for Lake Whitefish is included in the agreement, but we do not have enough information to determine if the quota is science-based and sustainable. Despite our best efforts, our request to arrange a meeting with MNR staff to discuss our concerns has unfortunately been postponed.”

OFAH questions to MNR on SON

1. The Principles agreed upon include: “Acceptance of the fact that there are many parties that hold interests in the waters around the Bruce Peninsula and their interests must be considered in any long-term Substantive Commercial Fishing Agreement between the Parties.” Given that:

Will the Saugeen Ojibway Nation and the Ministry of Natural Resources (MNR) honour their agreed-upon Principles by respecting these interests of the recreational fishery?

2. The purpose of a Total Allowable Catch (TAC) is conservation:

3. Are species, other than Whitefish, gill netted for commercial purposes?

4. Monitoring, assessment, compliance, and enforcement are all critical components of a fishing agreement. The agreement states “SON and MNR shall agree to a process to ensure compliance with this Agreement.” Please provide us with the details of these agreed upon processes, and outcomes to date, particularly given that the parties had agreed upon this since at least August 2011, for each of the categories of compliance, enforcement, monitoring, and assessment.

5. Given that both the Fish Stocking Working Group and the TAC Determination Working Group have been undertaking tasks since August 2011 at least, please provide us with detailed descriptions of their work and outcomes thus far.

6. Please provide us with the strategic and business plans prepared in December 2011 by the Capacity and Economic Development Working Group (we assume that a portion of the $850,000 provided by the MNR to SON went toward the business plan).

7. Are any of the costs of this SON Agreement borne by the Special Purpose Account (SPA)?

8. Please provide the information necessary for us to guarantee the health of the people who eat the fish caught by this gill net fishery is assured (e.g. chain of custody, government health inspections, etc.).

9. The fishery resources of Lake Huron and its tributaries are the shared resources of all Canadians that must be managed to benefit all Canadians. There is an existing framework for managing the shared Walleye and Yellow Perch fishery resources of Lake Erie. The MNR plays a very important role in managing and representing the needs of the fishery resource itself, as well as the recreational and commercial fisheries that use it. This comprehensive management framework continues to be improved through the Lake Erie Percid Management Advisory Group to provide a more formal, well-defined and transparent role for stakeholders in decision-making processes. This has helped to increase stakeholder involvement and reduce conflict between resource users. Did the MNR consider adopting an approach similar to Lake Erie to increase transparency and reduce resource user conflict? If not, why not?

The OFAH, the largest nonprofit conservation-based organization in Ontario, has 100,000 members, subscribers and supporters, and 710 member clubs across the province, and is the voice of anglers and hunters. 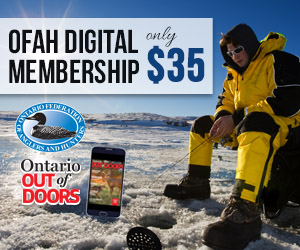