The following are some introductory Frequently Asked Questions for Firearms Bill C-21, which was introduced in the House of Commons on Feb. 16, 2021. This Bill is fresh and we haven’t had time to do a deep analysis on the proposals, but we wanted to inform firearms owners on what is happening as soon as possible. At this point, the answers to these FAQs only use information directly from Public Safety Canada and statements by the Minister of Public Safety and Emergency Preparedness, Bill Blair. As we learn more about the proposed legislation and the implications for firearms owners, we will continue to update this list and provide updates through OFAH e-news regularly with new information.

Public Safety Canada has stated that Bill C-21 would make “Compliance with handgun storage and transport restrictions a condition of federal firearms licence in municipalities that pass bylaws to:

Municipalities would notify the Minister of bylaws creating these restrictions and the Registrar of Firearms would inform affected licence holders, with conditions of licence to apply after 180 days to provide time for compliance. The Commissioner of Firearms will maintain a public list where restrictions apply. Breach of a condition of federal licence carries a penalty of up to two years imprisonment and possible revocation of licence or registration certificate.”

They also state that “Additional eligible grounds for storage restriction bylaws may be prescribed by regulation to adapt the regime, and in response to local needs. The Governor in Council may also prescribe exceptions”.

Minister Bill Blair has stated:  “We will enable them to implement additional regulations. And, yes, under the constitution, the provinces can stop them.”[MD1]

Public Safety Canada has stated: “the Criminal Code will be amended to allow anyone to apply to a judge for an order to immediately remove firearms from 1) an individual who may pose a danger to themselves or others, or 2) a third party who could provide firearms to such an individual. The order is for a period of 30 days. Applications are now available only to peace officers, firearms officers, and Chief Firearms Officers.”

Public Safety Canada has stated: “a new provision in the Firearms Act will allow a Chief Firearms Officer (CFO) to temporarily suspend an individual’s firearms licence if the CFO receives information calling into question their licence eligibility. During the suspension, an individual is prohibited from using their firearms, and cannot acquire new ones. This provides a pause while CFOs assess whether to revoke the licence. If the reasonable suspicion is eliminated prior to the end of the 30 days, the licence would be immediately reinstated.”

Public Safety Canada has stated: It would now “Require surrender of firearms during a legal challenge of licence revocation, and measures to facilitate their safe disposal if required. Owners would no longer retain their firearms while appealing a revocation.”

The Bill does not propose any change to current magazine capacity limits. However, Public Safety Canada has stated: It will “Create a new Criminal Code offence for altering a cartridge magazine to hold more than its lawful capacity with a maximum penalty of five years imprisonment on indictment or punishable on summary conviction.”

No. The government reiterated that it “intends to offer owners compensation for surrendering firearms prohibited on May 1, 2020. Details of a buyback program will be announced later.”

Public Safety Canada has stated: “The bill would create a lawful compliance option for those who prefer not to surrender their firearms: new grounds for non-permissive storage of prohibited firearms by imposing strict conditions: no permitted use, no import, no further acquisition, no sale, no bequeathal. To qualify for the option owners must:

In addition, they have stated that their approach “Ensures a known number of firearms and owners that will only diminish over time, and assures the market will remain permanently closed for these firearms.”

Public Safety Canada has stated: “Only these conditions would be available to the Governor in Council to apply in future cases through regulation, replacing the existing regulatory authority.”

Public Safety Canada has stated: It will “Close the gap in the Criminal Code regarding ‘replica’ firearms by ensuring the prohibition on importation, exportation and sale applies to all non-regulated airguns that look like modern firearms. Un-regulated airguns that look like modern firearms and fire a projectile below 366 feet per second (fps) are already considered replicas, and are prohibited. This amendment will close a gap to ensure that air guns firing a projectile between 366 and 500 fps are also considered replicas if they look like modern firearms. Current owners will be allowed to keep those they already own, but they cannot transfer them to another person.”

Public Safety Canada has stated: It will “Amend the Firearms Act to require presentation of a firearms licence to import ammunition to ensure that individuals without a licence cannot obtain ammunition from abroad, e.g. for an illegal firearm.”

Public Safety Canada has stated: It will “Amend the Firearms Act to authorize the disclosure of information about firearms licence holders to Canadian law enforcement agencies when there are reasonable grounds to suspect the licence is being used for straw purchasing and weapons trafficking. A reporting requirement will be added to the Annual Report of the Commissioner of Firearms to ensure transparency.”

It will also “Impose stronger Criminal Code penalties for gun smuggling and trafficking and related offences to increase maximum penalties from 10 years to 14 years imprisonment”.

Public Safety Canada has stated: It will “Improve the ability of the CBSA to manage inadmissibility to Canada when foreign nationals commit offences upon entry to Canada, including firearms-related offences. Technical amendments to Immigration and Refugee Protection Act would clarify that the existing regulation-making power may prescribe specific offences, whether in Acts or regulations, as applicable for this inadmissibility ground. Concurrent regulatory amendments are under development which would better focus the inadmissibility on the most serious cross-border offences, and would provide officers at ports of entry the authority to issue removal orders for the most straightforward offences, such as importing a firearm without a permit. Transfer policy responsibility for transborder criminality from the Minister of Immigration, Refugees and Citizenship to the Minister of Public Safety and Emergency Preparedness to better align with the Minister of Public Safety’s existing policy responsibilities with respect to border management, immigration enforcement, and criminal law enforcement.”

Public Safety Canada has stated: It will “Create a new Firearms Act offence for a business that promotes or depicts violence in firearms advertising with a maximum penalty of two years imprisonment, in the case of a first offence, and five years for each subsequent offence. The bill says glorification of violence against a person, so contrary to what some reports have suggested it would not include a depiction of hunting as 'violence'.”

There are a lot of changes proposed in Bill C-21 that would change the Criminal Code, Firearms Act, and other legislation. Our first priority is to fully assess the proposed changes to determine how it will impact firearms owners. As we learn more about the legislation and its impacts, we will share this information with the goal of wrapping it up in strong policy advocacy throughout the parliamentary process. Some of the proposals have been assesses, at least in part, in previous OFAH advocacy such as our May 2020 letter to Minister of Public Safety and Emergency Preparedness, Bill Blair. 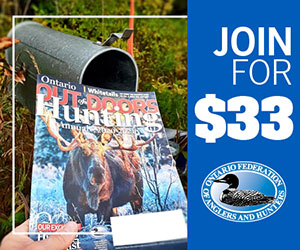