Despite the world around us slowing down due to the COVID-19 pandemic over the past six months, invasive species have not taken a rest and have continued to threaten our environments, our economy, and our society.

In 2019, we were happy to report that there had been NO new captures or confirmed reports of Grass Carp (Ctenopharyngodon idella) in Ontario’s waters after rigorous surveillance by our partners at the Department of Fisheries and Oceans Canada, the Ministry of Natural Resources and Forestry, and the Toronto Region Conservation Authority.

However, 2020 has been a different story as two invasive Grass Carp were captured in Ontario’s waters earlier this year. The first fish was captured by an angler on May 15th in Lake Erie near Point Abino and the second was captured by DFO’s Asian carp’s surveillance crew on July 2nd in Lake Ontario near Jordan Harbour. 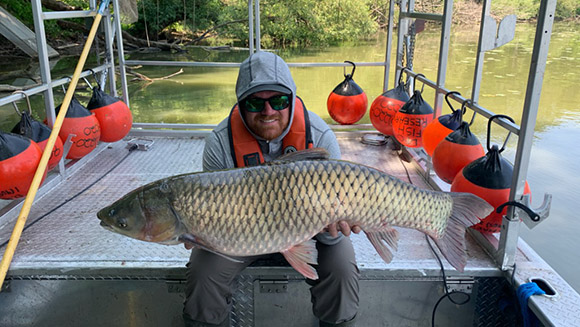 As a valued supporter of the Ontario Federation of Anglers and Hunters, you probably already know that our Invading Species Awareness Program, for years, has been working to prevent the entry of Grass Carp into Ontario’s waters through education and outreach as well as early detection.

Last fall, while in conversation with our partners, ISAP staff identified a gap in our collective outreach and education: what does an angler do if they capture a Grass Carp afterhours? Since then, we’ve worked to develop a factsheet for anglers to reference in order to minimize any risk to our native look-alike species like Fallfish (Semotilus corporalis) and White Suckers (Catostomus commersonii), amongst others.

If you suspect you’ve captured a Grass Carp or any other invasive species, take a photo, note your location, and report it to the Invading Species Hotline at 1-800-563-7711 or online at www.EDDMapS.org/Ontario

Visit www.invadingspecies.com/asian-carps/ for more information on the invasive Grass Carp.